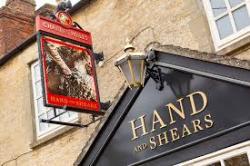 We have been in the Oxfordshire area since 1998.  Our first site was Carpenters at Middle Barton, we then moved onto the George at Long Hanborough where we stayed for 9 years, the pub was purchased in 2007 by Charles Wells.  We left this pub in 2013 and moved to the Lord Kitchener inn Curbridge for a period of two years.  Leaving there in 2015, returning now to the Hand and Shears.  Adrian had his own fruit and veg business prior to taking a pub, I worked for various pubs in the village I lived in to gain experience for my own pub six years prior to taking the Carpenters.

Email me jobs from Hand and Shears